Fixing a leaking kitchen faucet is not a difficult job as with the help of some specific tools and a few steps keeping in mind, one can easily do this job. However, a person fixing a leaking faucet must know the basic types of faucets used in the market nowadays.

Faucets are classified into four types: cartridge, compression, ceramic disc, and ball. A compression faucet seals the valve seat with rubber washers, which can wear out and need to replace after some time. In the case of the other three types of faucets, the leaking O-ring or neoprene seal must replace.

The following tools must require to fix the faulty faucet;

To fix the faulty faucet, turn off the water under the sink before beginning. Cover the drain with a rag to catch any dropped parts, and make a spot nearby to arrange the details in the order they will remove, To avoid scratching the fixture, tape the wrench’s jaws with duct tape, and have some distilled white vinegar and a soft scouring pad on hand to remove any mineral deposits found on the parts.

How to fix a leaky kitchen faucet with two handles?

The most common causes of a leaking faucet are a worn-out washer or gasket, a loose O ring, and valve seat corrosion. Turn the faucet handles to the on position to release any remaining water. Close the drain and protect the sink’s surface from catching any spills. Then remove the aerator to examine for any damage. Replace the cylinder and reassemble the faucet. Turn on the water supply slowly with the faucet knobs in the on position. Excessive initial pressure can harm the new hardware. In this way faucet containing two handles will fix.

How to fix a kitchen faucet leaking from the neck?

Leaking the faucet from the neck may be due to the damaged O ring, which can be easily replaced by adding a new one. To fix the faulty neck faucet, open it with a screwdriver, remove the plastic O ring, and then place it back. The other reason for leaking from the neck is corrosion of metal or metal fatigue which a new one from the market must replace.

Is the kitchen faucet leaking at the base and under the sink?

The most common example of a leaking faucet from the base is water puddles around when it has to be opened. Usually, this happens due to faulty O rings. In the case of a single or double handle, remove and clean the aerator; if the leak stops, then all is well. If it doesn’t contain it, replace it with the new one. In the case of the double handle, widespread then replace the O rings of faucets and leaking will stop at the base.

A leak under the sink is most difficult to detect because most people do not look under the sink regularly. However, because this water has nowhere to go then than the flour, this type of leak can cause serious damage to the floor, or it may seep down through the floor and can cause damage. To examine, run some water to see where the leak is coming from. There are two possible causes of leaks under the sink;

Ø Water supply connection may be loosened.

Ø P-trap connection to the sink may be loosened

If the causes mentioned above are detected, then tighten the connections with the help of a wrench and put steel and plastic rings onto them to tighten them.

Kitchen faucet leaks when turned on:

There are many reasons for it, such as when water is turned on, and a faucet may leak away due to several reasons, i.e. worn-out washer, loose O ring or gasket and corrosive parts. Most faucet repair plumbers can detect and repair minor issues. Most faucets will leak due to the grinding of metal parts inside the faucet regularly on and off the faucet. This may damage the seal were replacing the O-ring may not be enough to stop a leak. If you returned a worn-out O-ring but still have a leaky faucet, you most likely have a damaged valve seat that will replace its parts with the new one.

Replacing a leaking kitchen faucet is extremely necessary as it can be a loss of a natural resource that is not easily collected and purified if discarded. A leaking faucet is also annoying for someone working in the kitchen. Inspection for corrosion and damaged O-ring is very important in fixing the tap. Fixing under sink faucet is also not tough to work; by doing a good examination, you can also set this problem.

How do I stop my kitchen faucet from dripping?

Various methods can stop a dripping faucet, but the most common is to know the root cause, i.e. from where it starts, and according to the need, the faucet may be fixed or replaced by the new one. Strict inspections after regular intervals will stop the kitchen faucet from leaking.

What causes the kitchen faucet to leak at the base?

A leak around the faucet’s base, where the faucet body meets the sink, is less obvious because users constantly splash water around the sink deck and faucet’s base. To check for this type of leak, dry up any standing water on top of the sink. Then, turn on the water and carefully inspect the faucet for water seeping around the base.

When the valve is turned on, water can seep down along the faucet body and out the bottom if worn or cracked. Less commonly, leaks in this area can be caused by a dull inner cartridge. If repairing the O-ring does not solve the problem, you may also need to replace the valve cartridge.

How do you fix a faucet that won’t stop leaking?

Turning off the water is one of the most important steps in repairing a leaking faucet. If you do not turn off the water to the sink, your kitchen may flood. Look for the fixture shutoff valves beneath the sink and turn the handles clockwise to turn off the water. Turn off the main water supply for the house if your faucet does not have a shutoff valve. Turn on the faucet to ensure that the water is turned off. If no water comes out, you’ve done your job. However, inspection with running water is extremely hard, so stopping the water, in any case, is the only option.

How do you replace an O-ring in a kitchen?

To keep water from oozing out around the spout, kitchen faucets have one or more O-rings. If the ring becomes worn, you will notice water at the base of the spout whenever you turn on the water. The coupling nut is removed to change an O-ring and lift the work spout up and out of its socket, revealing the rings. Replace any broken rings with new rounds of the same size. Reinstall the faucet. O-ring is very important in faucets as it works as a primary seal to stop water from leaking, so replacing the damaged O-ring with a new one is an important task which prevents the faucet from leaking. A good eye on the faucet is necessary to change the O-ring. 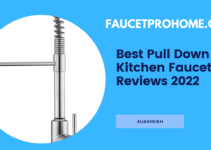 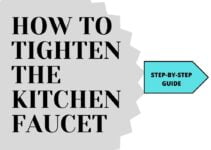